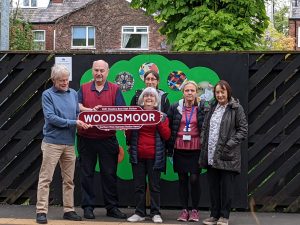 Woodsmoor Station Friends formed in 2016 to work with the community and Network Rail. We aim to improve the station environment and facilities to create a vibrant social focus for the many commuters and travellers who catch trains every day from Woodsmoor Station.

Woodsmoor is a wonderful suburb of Stockport in Greater Manchester. This leafy area is served by Woodsmoor Station opened by British Rail in 1990. It is still one of the newest stations on the network.

Woodsmoor has a rich history spanning hundreds of years. From the late 19th-century, house building on former farmland created the small but perfectly formed district we live and work in today.

The area still has many large and old trees, existing since it was the estate that later became Stockport Grammar School. A disused golf course on the former Mirrlees Blackstone Engineering site links Woodsmoor with neighbouring Stepping Hill Hospital and Hazel Grove village.